In Erlang we have two ways of getting a value from a map. We can use map:get/2 or we can pattern match the value out of the list using the #{ key := Value } = Map syntax. In Elixir we have another option Access. With Access we can get values out of a map or a keyword/property list using a square bracket syntax:

This got me thinking about the implementation. Is the Access behavior in Elixir just as fast as the map:get/2 function?

The two implementations I am benchmarking look like this:

I decided to benchmark each method by generating lists of a dozen random keys and then building a map containing 75% of those keys. Then I look up each of the generated keys in the map. I repeat the process 50000 times per method and take an average of the execution times. The benchmarking code is shown below:

I ran the script several times and consistently got similar numbers.

The Access behavior does have to do type checking at some point during execution to determine whether or not it’s dealing with a map or keyword list. That type checking isn’t free but it only makes the square bracket syntax 0.5% slower than Map.get/2. With such a minor small difference in execution time the square bracket syntax should not have a noticeable affect on performance when running real Elixir applications. Obviously the less type checking you can do the faster your app will be, but in cases like this it’s not something that will ever become a bottleneck, even when your app is pushed to the limits.

If you don’t care about performance you can safely use either of these methods to lookup values in a map. The Access behavior is only 0.5% slower, so even if you are concerned about performance there are probably other things in your codebase that are having a greater impact on the performance than the square bracket syntax. 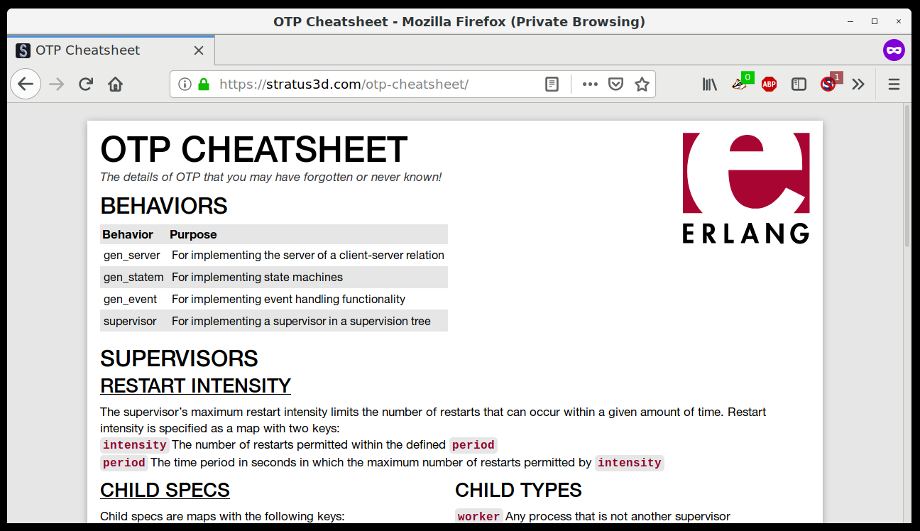 A last year I created an Erlang cheatsheet. I goal was to keep it fairly simple and only include the things that I often forgot. I decided to limit it to a single page so I could print it out and pin it on the wall for reference. I’ve been doing a lot of Elixir recently, but the cheatsheet has still be useful to me and my coworkers. There are a lot of things I often have to lookup with working with supervisors and other OTP behaviors so this month I decided it would be nice to have a seperate cheatsheet for OTP. This new cheatsheet follows in the same vein as my Erlang cheatsheet. It is intended for those experienced with OTP and not beginners.

The cheatsheet is available for you to freely print or download at https://stratus3d.com/otp-cheatsheet/. The source code has been released under the MIT license and is available in the same repository as the Erlang cheatsheet on GitHub at Stratus3D/erlang-cheatsheet.

Let me know via email or twitter. If you want to contribute directly feel free to create an issue or pull request on the GitHub repository.

Another look at algorithm time complexity

I needed to have a process for each algorithm to store the computed Fibonacci numbers. I chose to create a single generic GenServer that I could spawn for each algorithm I was testing. Below is the implementation I settled on. It’s fairly straightforward. The only thing special about this GenServer code is that it allows the caller to specify the server they want to use. This is necessary because I will have multiple processes running different instances of this GenServer. One for each implementation I am testing. I need to have a different FibStore server because each algorithm is different so I need to make sure I store and fetch Fibonacci numbers from the correct server.

Next I needed to update the existing functions to use this new GenServer for fetching and storing values. The previous implementations had a fib function that performed the actual computation. To avoid modifying a lot of code I added a new function named do_fib that only calls the existing fib function to do the computation if the Fibonacci number has not already been computed and stored in the GenServer instance. Below are the three new implementations:

In my updated implementation so that the fib clause for generating any number after the first two in the Fibonacci sequence invokes FibStore.do_fib/3. This ensures it will reuse already an computed number if there is one. Otherwise FibStore.do_fib/3 will invoke fib/1 to compute and store the number.

In much the same way I changed the Rosetta Code algorithm. It invokes FibStore.do_fib/3 when computing Fibonacci numbers so it uses pre-computed numbers if exist in the FibStore process. Otherwise it invokes fib/1 to compute the Fibonacci number. Note that unlike my implementation this one must recompute everything when generating a new number in the sequence. For example, when generating the fifth number it would not be able to reuse the 2 and the 3 cached in the FibStore process. I could not make it reuse pre-computed numbers without changing the way the fib/3 function works.

Which function generates a list of Fibonacci numbers the fastest?

My bet was that my implementation would still perform better than the others, but I wasn’t sure which of the others would be the fastest. The Rosetta Code algorithm wasn’t able to leverage the FibStore caching as much as others; but then again it was already a fairly fast algorithm.

I ran the benchmark once to capture the performance when no state. Time is in microseconds.

After the first run I ran the benchmark again against each algorithm four times. The average run times are shown in the table below in microseconds.

For comparison here are the average run times of the original algorithms:

The Rosetta Code algorithm doesn’t really benefit from the new process caching. The performance characteristics remain the same, and it runs nearly 5 times slower. My algorithm did not benefit from the process caching either. It ran about 4 times slower than the original algorithm. Even though processes are cheap on the Erlang VM, and local messages are fast it’s clear the overhead of caching the data in a separate process is taking a toll on these algorithms. Sending a message is cheap, but eventually the time it takes for the process to be scheduled after receiving a message adds up. When no data is cached these algorithms must send and receive at least 2 messages for every recursion needed to compute the final number. Even when the number has already been computed two messages are needed to fetch the number. The two original algorithms performed well by keep pre-computed numbers in process memory and reusing them when necessary, so this caching only reduces the arithmetic operations needed on subsequent calls. And even on subsequent calls the overhead of sending and receiving two messages is greater than the cost of computing the list of Fibonacci numbers all over again; at least for the first 45 Fibonacci numbers in the sequence.